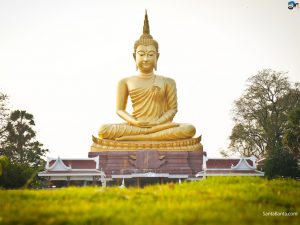 The evidence of the early texts suggests that Siddhārtha Gautama was born into the Shakya clan, a community that was on the periphery, both geographically and culturally, of the south asian country Nepal in the 5th century BCE. According to the Buddhist tradition, Gautama was born in Lumbini,  raised in the Shakya capital of Kapilvastu, which may have been in either present day Tilaurakot, Nepal or Piprahwa, India. He obtained his enlightenment in Bodh Gaya, gave his first sermon in Sarnath, and died in Kushinagar.